The more I use the HP TX1000 (TX1001xx) convertible (tablet) entertainment PC, the more I think that this machine is a great all around choice for the mainstream consumer. It’s got just about everything, and the customization choices on the HP web site provide enough options for just about anyone.

I’m still struggling with the Tablet PC handwriting functionality. Without taking extra care to apply pressure to the stylus and write “just so”, I’m still getting Klingon letters. My friends among more knowledgeable tablet pc owners and Tablet PC MVPs tell me that this is due to the difference between the passive technology and the Wacom technology found in other vendor’s offerings. Still, I think that after some additional training, I could get some usefulness (but could never use tablet handwriting full time and give up the keyboard).

I’ve been sampling the entertainment features. The included QuickPlay application interface seems dull when compared to the Windows Media Center interface. QuickPlay doesn’t “see” media on networked drives except using Windows Media Sharing UPnP. I’ve got a lot of media on desktops, so would have preferred the ability within the QuickPlay app to find source media on these drives directly in the same way MCE allows me to. QuickPlay does support Karaoke and .car files. I’m pretty sure college kids will find this a great feature. (If you’ve ever heard me try to sing you will be grateful that I didn’t attach an audio sample to this post.) I’ve heard a rumor that QuickPlay will eventually tie in with Slingbox and asked HP about this. They’ve confirmed this will happen and will show up after an update in the TV source section of QuickPlay. 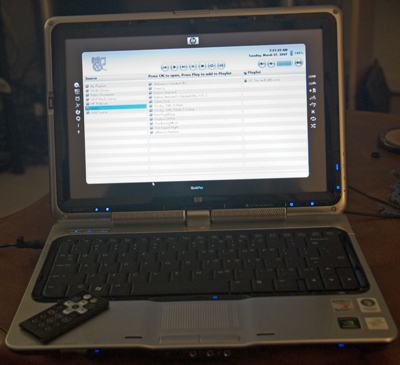 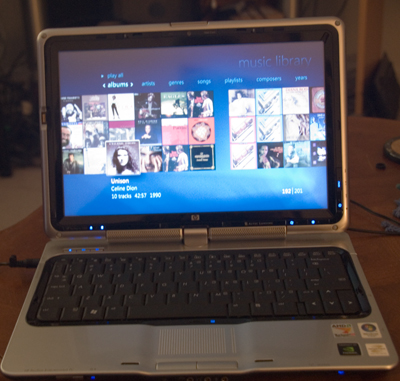 Speaking of Recorded (and Live TV) while HP makes a TV Tuner that fits older notebooks with an ExpressCard/54 slot, they do not offer one for ExpressCard/34 slots. This is disappointing (although there are USB tuners available). This would be a great accessory add-on and hopefully this is at least on the drawing board.

The TX1000 comes with an awesome mini remote. One real plus (and a great feature) is that the included mini remote control that stores in the ExpressCard/34 slot operates both QuickPlay and MCE. That was a surprise and a pleasant one at that! Equally surprising (and amazing) is that the remote can be used to present a PowerPoint slide show. 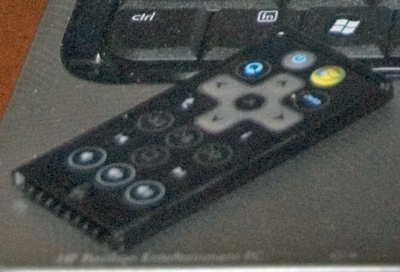 Stereo Altec Lansing speakers are mounted below the screen and rotate with the display. This means that when tablet mode is used, the speakers don’t get buried under the screen (and are front and center in every configuration you use). There are dual headphone jacks (good for those airplanes trips when two of you want to watch the same DVD or listen to the same music) and one apparently supports SPDIF if you purchase a special cable. There were two sets of (really cheap, as in $6.99 for two when you include if customizing the notebook on line) earbuds included with the package I received. I’m a proud owner of Shure E5C’s (http://www.shure.com/PersonalAudio/Products/Earphones/ESeries/us_pa_E5c_content ) so I happened tried the earbuds that were supplied.

There are buttons surrounding the rim of the screen that invoke QuickPlay, DVD and buttons behind the rim for stop, play/pause, FFWD, REW, etc. These are accessible in all rotation modes. Clearly well thought out and pretty neat to find. This gives the TX1000 high marks as an entertainment device.